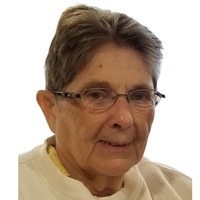 Joan DeBoer, 81, of Sioux Falls, South Dakota passed away on Monday, August 31, 2020, at Sanford Centennial Hospice Cottage in Sioux Falls.  Memorial Services celebrating the life of Joan and her son, Daron DeBoer who passed away in July will be held at 2:00 p.m., Thursday, September 3, 2020, at George Boom Funeral Home & On-Site Crematory in Sioux Falls.  Visitation with family present to greet friends will be from 1:00 p.m. until the time of service at the funeral home.

CLICK HERE at 1:58 pm on Thursday for a live stream of Joan and Daron's Service

Joan Stearns, daughter of Herbert and Ellen (Frank) Stearns was born May 22, 1939, in Sioux Falls.  She graduated from Washington High School with the class of 1957.  She moved to San Diego for five years before returning to Sioux Falls.  Joan was an avid fast pitch softball player.  She played for Locke Electric for over 20 years.  Her love of the sport lead to many national tournaments through the years and she won many awards and trophies.  She also enjoyed bowling.  Besides softball she enjoyed the simple things in life such as watching her Minnesota Vikings and Twins.  She enjoyed going to rummage sales every Saturday morning with her son Daron, daughter Cheri, and son-in-law, Dave.  Joan had many many friends, Ardene, Sharon, and Deb to name just a few.  She also had cousins galore including Karen, Jim, Cheryl, Deb, and the list goes on.  They often accompanied her to her favorite watering holes such as the American Legion and her most favorite the Gateway Lounge.  No matter where she lived, it had to be close enough so she could drop into the Gateway for a cold beer and the famous Monster Burger.  She was employed with Hiland Potato Chip Company for 20 years.  She also worked for Starmark Cabinets.  She bravely fought cancer for the last four years without a complaint.

She was preceded in death by her parents Herbert and Ellen; son, Daron in July of 2020; and brother, Stanley Stearns.

To send a flower arrangement to the family of Joan M. DeBoer, please click here to visit our Sympathy Store.